Why Buying Dogecoin is (probably) a Bad Idea

We don’t like to bash any particular projects (and that is not our intentions here). It’s just hard at times watching a coin pump so high, knowing that there’s gonna be a huge crash around the corner. A lot of newbies are investing way too much into something they fundamentally don’t understand. If you’re looking for a sweet cash grab along the way that’s one thing. For those who think Doge will be the next big thing... please be careful.

Controverial headline likely. In this sense, it means that it isn’t really solving anything. 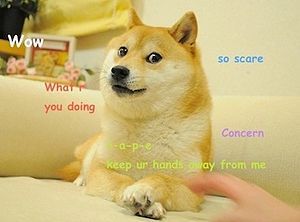 It was based off the Doge meme. It’s not innovative. Its protocol is based off of Litecoin. If anything it is The Original™ crapcoin. It’s not a scam, as it has been around for a while and hasn’t tried to convince people of being something it’s not. It’s just not something that those with experience in cryptocurrency would seriously invest in.

The main use of the coin is humor. Secondary, a cool system of tipping people with twitter/reddit bots. It’s in a some what convinent placement from being an old, established, cryptocurrency. It’s listed on most exchanges and it’s got quick network transactions and low fees. This makes it a good choice for moving between cryptocurrencies

There are billions of Dogecoin with no hard cap. Millions are printed a day. It will never be worth as much as 1 Bitcoin is. 1 dollar is already a huge stretch. That would put it’s market cap around the size of Ethereum.

Inflation is not necessarily bad. It discourages the hoarding we see in Bitcoin. Because your holdings are worth less over time, you’re encouraged to spend them. That‘s a positive thing for the adoption of the currency. Just know that if you’re buying to hodl, you’re better off buying something else.

It’s Mostly Riding the Wave of GME and Elon Musk

What we are experiencing is a classic pump and dump. Elon Musk isn‘t a cryptocurrency guru despite the attention his tweets get. He‘s had little to none invested until recently. His tweet was most likely a joke that people took a little too seriously.

Pumps and dumps are very dangerous. No value has been created, so what goes up will come crashing down. Combined with the natural inflation of Doge, it may not pump as high as one would think.

Money will be redistributed. The ones who got in early and got out will be the winners. You’ve got to keep a close watch on the market since cryptocurrencies can crash quite quickly. It’s important to know what you’re getting into and invest accordingly. Don’t invest more than you can afford to lose, especially in this situation (perhaps the amount you’d be willing to spend on scratch cards).

It’s essential to do your own research when making an investment. Be especially careful of following hype and the words of celebrities. Dogecoin has a great community and the currency is not at all a scam.