PayPal and Broader Adoption of Cryptocurrency 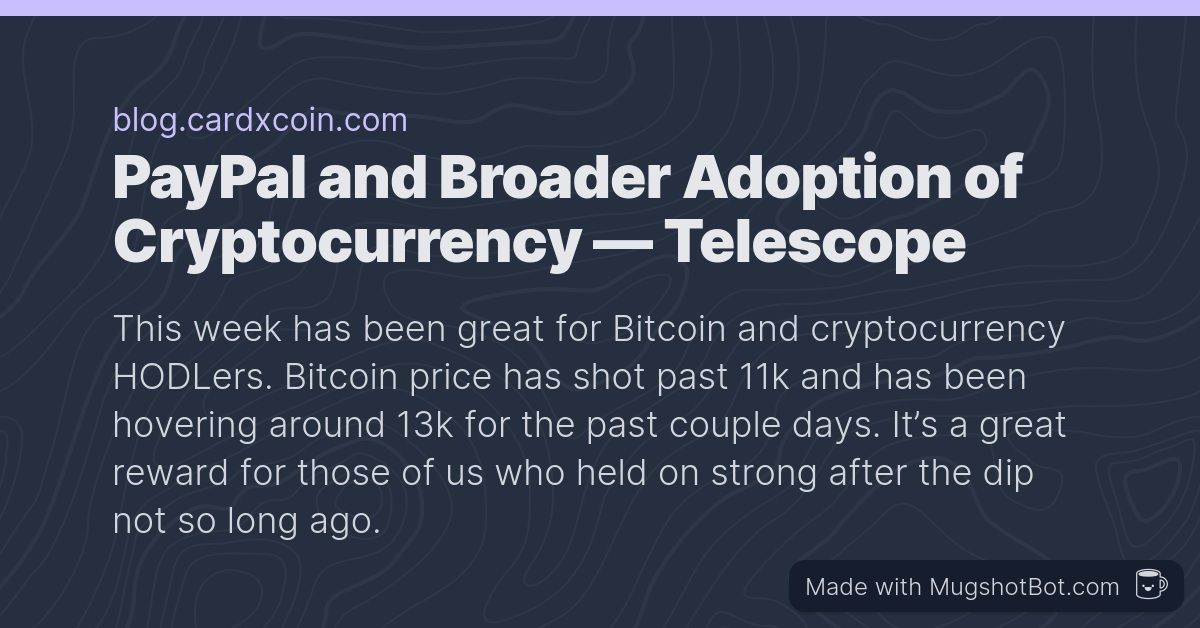 This week has been great for Bitcoin and cryptocurrency HODLers. Bitcoin price has shot past 11k and has been hovering around 13k for the past couple days. It’s a great reward for those of us who held on strong after the dip not so long ago.

It’s easy to stay positive in a bull run, but this article is for those of you who’ve not invested yet.

If you‘re already interested in cryptocurrency but feel like the ship has sailed long ago, don‘t let that stop you. You think:

Check this out. The whole cryptocurrency market is about the size of a handful of billionaires, or one big corporation. It‘s the youngest meaningful currency and the world’s first global currency. It’s just a reminder that the cryptocurrency industry does have a lot of room for growth.

Companies and Corporations Are Taking Notice

Within the past few years, a few startups in the cryptocurrency community have grown to be huge corporations. Exchanges like Binance, Coinbase, and BitPay have paved the way. The established players in the traditional financial system have taken notice and are now getting their share of the cryptocurrency pie.

In 2018, Square added Bitcoin support to their CashApp. In the fourth quarter of 2019, it accounted for half their revenue.

In 2019, Facebook attempted to launch their own cryptocurrency before it imploded.

Now, just this week, PayPal has done a 180 on their stance on the digital currency. In the past, they’ve been known for freezing accounts of people making cryptocurrency transactions. Now, all of a sudden, they’re integrating cryptocurrency purchases and transactions into PayPal and their subsidiary Venmo. More than just integration with their platform, PayPal is rumored to be in the market for purchasing their own exchange.

None of this would be happening if there wasn’t a positive outlook for their wallets.

This isn’t a financial prediction that Bitcoin or some other random altcoin will rise 1000% this year. This is a perspective from someone who works in the cryptocurrency industry day in and day out (or call it bias if you will). There are breaking innovations happening all the time. The articles we‘ve covered on the subject are just scratching the surface. It’s actually quite hard to keep up with. The cool thing about blockchain technology is that it has cross-industry applications. Any industry that relies on a big trustworthy authority can probably be decentralized with blockchain technology.

That in and of itself may not seem like a big deal when it’s so easy to rely on a trusted authority. The new blockchain platforms can be unwieldy and awkward.

Just like it’s easier to leave your door unlocked until your stuff is stolen, trust is good right up until it’s broken. It’s much better to be able to prove that a platform works than to trust that it does. Blockchain platforms may not be the most user-friendly right now, but they’re big on being open source and community run. There are always people iterating and building off of each other.

The internet was once unwieldy and technical. It used to be easier to shop physically in stores. Things got better and they improved to the point where we wonder how we used to do things before it existed.

There is a lot of hype surrounding the cryptocurrency field. There are a lot of shady people and scams and sometimes that hides some of the real work that goes on behind the scenes. We write briefs like these weekly, about all the best parts of blockchain tech and cryptocurrency. If you’d like to keep up with them you can subscribe directly to this blog, or to our newsletter which contains even more. Our newsletter is curated, and you can reply directly to it with any questions, comments, or suggestions.

Lastly, if you’re looking to get involved or make your first purchase, you can use CardxCoin to buy cryptocurrencies with unwanted gift cards or just your debit card.